What comes to your mind when you hear the name 4G63? It’s probably the fast Mitsubishi Evolution, and you wanted to learn about them in this article. But no, here we talk about non-turbo 4G63’s, they also exist.
These engines are part of the Mitsubishi Sirius family. They were first shown in 1981 when they replaced the 4G52.

This engine was built on the cast iron cylinder block with two balance shafts. Its deck height is 229 mm. Inside the block, there is crankshaft with a piston stroke of 88 mm, 150 mm conrods, and 85 mm pistons with a height of 35 mm. As a result, we have 2 liters of displacement.

First, this block was covered with an 8 valve SOHC head; it was later replaced by a 16 valve SOHC, and in 1987, 16 valve DOHC heads were launched.
These heads had hydraulic lifters, so there was no need to worry about valve adjustment. The size of intake valves is 33 mm, of exhaust valves — 29 mm. timing belt was used for this engine that should be replaced every 60,000 miles (90,000 km).
The naturally aspirated 4G63 used 240 cc fuel injectors.
Along with this engine, turbocharged 4G63 – 4G63T was produced. If you came here to learn about it, click here. There I told everything about this legendary engine. 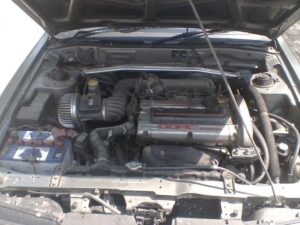 I would like to say a few words about the difference between 4G63 and 4G93 for those people who want to modify their 4G93 using 4G63 parts. Well, this is impossible, these are completely different engines. They only have similar names.

Mitsubishi replaced this 2.0-liter Sirius with a newer 4B11, but various companies around the world produced the naturally aspirated 4G63 for many years.

1. Vibrations. This problem is quite common, just check the state of engine mounts (most often the left side). Replace it if necessary, and vibrations will disappear.
2. Rough idle. Here are the main reasons for this problem: dirty throttle, idle control valve, fuel injectors, and ECT sensor. Check all this, clean or replace it if necessary, and your engine will work again.
3. The problem with balance shafts. This happens if you use poor quality engine oil. In this case, the risk of insufficient oil flow to the bearings of the shafts increases, which can lead to shafts jamming and breakage of their belt, and this belt can provoke the breakage of the timing belt.
Want to avoid this? Do not choose cheap and poor quality oil, regularly change the balancing shafts belt or use the balance shaft delete kit.

But that’s not all, using poor quality oil, you destroy hydraulic lifters. With the use of poor quality oil, their service life is about 30,000 miles (50,000 km).
To sum up. Are 4G63 engines reliable? Of course, they are! Good maintenance and high-quality oil can work wonders. You have an incredibly reliable engine, the 4G63 lifespan can be 200,000-250,000 miles or more (400,000+ km).
But if it was not cared for at all and roughly operated for many years, do not expect reliability.

Let’s see how to build a 4G63 engine with and without a turbocharger. I would like to say that the second method is not the best way to make your engine powerful, the non-turbo approach is a waste of time.
It is easier to buy a cold air intake system, a 4-2-1 header and tune the ECU.
You will add the incredible 5 – 10 HP.
Not impressed? I know, so buy 264/264 cams, cam gears and you have +20 to the stock engine. You can buy ITB, 272 camshafts or even more, but remember that any stock turbocharged 4G63 will easily leave you behind.
To fans of building a powerful N/A engines, I recommend choosing a Honda K20/K24, that’s where you get the true high-rev fun.

Despite the very similar names, your 4G63 is very different from the 4G63T and you will need a lot of upgrades to transform it. Let’s see what you will need to successfully transform an NA to a turbo. First, make bottom-end like in Evo. Your engine block is the same, but it does not have oil injectors and you have to install them. You also need Evo main bearings; the crankshaft has the same dimensions as in Evo, but in the turbo version it has a different coating, so you may keep it. Take Evo conrods and 4G63T pistons, your OEM pistons do not keep the boost pressure. Do not forget about an Evo oil pan, an Evolution oil cooler, an Evo oil pump, an Evo water pump, and an Evo timing system.
Next, you will need an Evo head, the entire Evo intake system, a MAF-sensor, a boost controller, a fuel system, and an Evo ECU. And you still have to make your own turbo manifold because your starter motor is placed differently, and a stock 4G63T turbo manifold will bear against him.
You will need a 2.5″ exhaust system. Tune the ECU, and the engine will show 350 HP.

Do you think all this is too complicated? Then consider buying a Mitsubishi RVR Turbo engine. Its installation in your car is easier. This engine has a small TD04 turbocharger that is more comfortable for daily use. Consider this option as well.