Let’s talk about something great and very famous, something many people have dreamed about – the 4G63 turbo engine. It is quite an old engine but it is still loved even today. Why is the 4G63 so good? Because it is very reliable and easily gives a lot of power. And there is an incredible number of aftermarket parts available for it.

Let’s look at its technical side, and find out what the difference is between 4G63 and 4G63T. This engine was created based on the non-turbo closed deck 4G63 cylinder block, its deck height is 229 mm. In this block, the engineers installed oil jets for cooling the pistons and installed a slightly modified crankshaft with a piston stroke of 88 mm. The length of the Evo conrods is 150 mm. The pistons here are completely different, their height is 35 mm, and the piston size is 85 mm. There also are balance shafts for reducing vibrations and ensuring softer operation.

A modified DOHC 16-valve head is used here with new valves, valve springs, valve spring retainers, cams, and an all-new fuel system.
The fuel injector size is 450cc.
Here are the specs of Evo cams (1G): duration 252/252 deg, lift 9.5 / 9.5 mm.
A 60mm throttle body and a 2-stage intake manifold are used here.
Of course, it is a turbocharged engine, it has TD05H-14B turbo or TD05H-13G turbo for vehicles with automatic transmission. The Evolution boost pressure is 8.7 psi (.6 bar). Well, I described the first original Evo I engine. Mitsubishi has been working on it for many years and released many modifications. I will describe the differences between them all below.
The 4G63T uses a timing belt that is to be replaced every 60,000 miles (90,000 km).

You could buy a new Evolution with this engine until 2007, and after that, Mitsubishi Lancer Evolution X was released, with the all-new 4B11T installed. 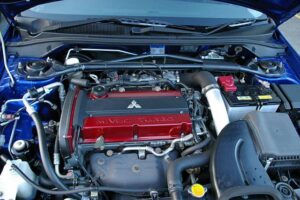 2. 4G63T 2G (1996 – 2001) — these engines were intended for installation on the right side of the car.
Let’s compare 4G63 1G vs 2G: in 2G, a 52mm throttle body, a reduced intake manifold, a modified head with smaller ports and more aggressive camshafts are used.
The 4G63 2G camshaft specs are as follows: duration 260/252 deg, lift 10/9.5mm.
Also, weaker conrods and lightened pistons were installed on the new engine, the compression ratio was reduced to 8.8:1, a metal head gasket and a new exhaust manifold were used.
The twin-scroll TD05HR-16G6-9T turbocharger was installed here for the first time, and the boost pressure increased to 13 psi (.9 bar).
All this allowed obtaining 280 HP at 6,500 rpm; the torque was 353 Nm at 3,000 rpm.
This is exactly the engine installed in Lancer Evolution IV.

In 1999, Lancer Evo VI was launched. The engine remained the same, but the cooling system was modified.
The Lancer Evolution VI RS cars feature a new TD05HRA-16G6-10.5T turbocharger with titanium blades. This ensures the full boost much earlier.
A little later, everyone’s favorite Evolution 6 Tommi Makinen Edition, or Evo 6 TME, or Evo 6.5 appeared.
The engine of this car got a TD05HRA-15GK2-10.5T turbocharger with the compressor wheel reduced to 65 mm.
Cars of the Evo 6 TME RS version used the old TD05HRA-16G6-10.5T with a 68mm compressor wheel.
All Evo 6 TME engines feature lightweight pistons and an increased intercooler. Such 4G63 yielded 280 HP at 6,500 rpm, and the torque was 373 Nm at 2,750 rpm.

Failures of Sirius engines are similar, and you can read about them HERE.

Stand facing the engine, and under the exhaust manifold on the left side, find a platform. You will find the number there. 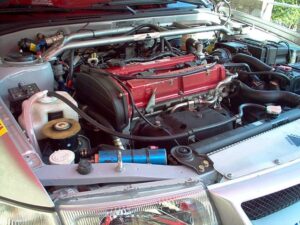 Here we will briefly go through the entire upgrade path from the beginning up to 1,000 HP on the example of Mitsubishi Evolution 9. But first, make sure your engine is in good condition, it may need repair. Check whether the compression ratio meets the characteristics, or whether it is higher. If the car had many owners before you, it is especially important.
If you have an Evolution 4 through 7, I have bad news – your OEM connecting rods are weak, and are to be replaced with Evo 9 rods or forged rods (if you aim at 500+ HP). It would be nice to use an Evo 9 turbo or a turbo of the same size. After any changes you have to configure the ECU, otherwise, you will not get high specs.
Now let’s see how to build a 4G63T engine.
For instance, the first step is 400 HP on the crankshaft or more (all numbers here mean the power on the crankshaft). It will be the so-called 4G63 Stage 2.
You will need the following upgrades:
– a 3-inch exhaust system
– 750 cc fuel injectors
– a Walbro 255 lph fuel pump

A good 3-inch exhaust system should not have narrowings, it should be honest 3 inches from beginning to end. A good option would be an Invidia exhaust system with an Invidia downpipe and an Invidia turbo outlet. You can choose another one, but not less than 3 inches.
Your OEM fuel injectors won’t work for long in overdrive, it is desirable to replace them with 680cc or 750cc (for future upgrades).

Let’s move on? The second step is 420 HP, and here are the aftermarket parts that I recommend:
– a cold air intake
– a Mishimoto radiator
– a 3″ ETS intercooler and pipes

The third step. We are aiming beyond 430 – 450 HP, which means that we need some more performance parts:
– a 68 mm Skunk2 throttle body
– a Skunk2 intake manifold
– a balance shaft delete kit
These mods will allow using the potential of a stock turbo better.

The fourth step. The goal is 440-460 HP. Here is the list of upgrades that you will need:
– Kelford 272 cams or Tomei 270 cams
– adjustable cam gears
– valve springs and retainers
– a TiAL bypass valve
– a 1.5″ ETS header
– 1,000 cc fuel injectors
– an Aeromotive fuel rail
– an Aeromotive fuel pressure regulator
– an Aeromotive 340 lph
You should not use a blow-off valve, a TiAL bypass valve is the best choice.
After this stage, you can abandon this crazy race for maximum power from OEM Evo turbo and simply buy an FP Green turbocharger.
The fifth step. Now we are ready to reach am almost 500 HP build using a stock Evo turbo. This is the max HP that is available with a TD05-16G.
Ok, here is the list:
– head porting
– 35 mm intake valves
– 31.5 mm exhaust valves
– bronze valve guides|
– water/methanol injection.
Adjust all this to the maximum, and you will reach the limit for an OEM turbo. The lifespan of your turbocharger will not be very long.

The sixth step. Going beyond 500+ HP, the main thing you need is
– an FP Green, or a TD06-20G turbo kit, or something like that.
If you have done all I said above, you have a beautiful cylinder head, but the weakest point is the OEM Evo turbocharger. It is better to use something like FP Green from the very start. It can show 500-600 HP at the crankshaft. You can also use other turbo kits, for example, TD06-20G, it will yield about 500 HP.

The eighth step, and 600+ HP
– an FP Red turbo
– a 3.5 “intercooler
– an AMS intake manifold
– a big throttle body
– a Walbro 400 lph
– 1600cc injectors
– Mahle pistons or JE pistons
– ACL main and rod bearings
– ARP head studs
Using these performance parts, you can easily get more than 600 HP. For your stock pistons, 600 HP will be close to the maximum. Of course, they can do more, but we want a reliable engine, so I recommend completely switching to forged pistons and rods. They provide the opportunity to proceed to an even higher power.

The ninth step, 700 HP at the crankshaft.
– an FP Black turbo, you already have forged internals and you can proceed to really high power. To see number 700 on the chart, you should use an FP Black turbo or something of similar size.
This will be enough to run 1/4 of a mile in high 9’s.
You might already think about switching to 2.1 destroker + GSC S3 cams or a 2.2 stroker kit.

Let’s have a look at the main stroker kits: