This large engine replaced the old 4G54, and had been created based on the 4G63; it also had a closed deck but had a different height of the block. Let’s learn about all the differences between 4G63 and 4G64. The engineers increased the deck height to 235 mm and installed a long-stroke crankshaft in this block with the piston stroke of 100 mm. The cylinder diameter was increased to 86.5 mm, and the length of connecting rods remained the same — 150 mm. This block also had balance shafts. The compression height of the pistons was 35 mm. All this provided 2.4 liters of displacement (2.35 liters, to be exact).
The crankshaft weighs is 15.8 kg, the pistons weigh is 354 g, and the connecting rods weigh is 623 g.

All of these 4G64 heads are equipped with hydraulic lifters and you don’t have to worry about valve adjustment. 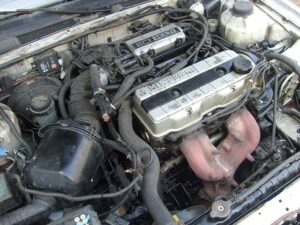 Since this engine is nothing more than an enlarged 4G63, the problems of these engines are similar. It is very reliable, but it has problems with rough idle or vibrations, you can read about them in detail HERE.

If you want to go the non-turbo way, then your SOHC head should be thrown away. Instead, you need a G4JS DOHC head — such engines were installed in the following cars:

The G4JS engine is an analog of your 4G64, but with a DOHC head. In addition to the head, you will need the entire intake and exhaust system. To this, you can add a cold air intake, an Evo throttle body, 272/272 camshafts + cam gears + valve springs, a Mitsubishi Galant fuel rail, 450cc fuel injectors, a more powerful fuel pump, and a 4-2-1 header, a 2.5″ exhaust system; besides, you should remove balance shafts. You can also buy forged internals to increase the compression ratio to 11.5.
All this needs configuring, and you will get close to 200 HP.
But if you are going to do such large-scale work, it would be better to use a turbocharged Evo head and the power will be much higher.

Now you will learn how to turbo the 4G64 and what main performance parts you will need for this.
There are two scenarios here:

The first way is the easiest one; you just take your stock engine and install an Evo turbo. The compression ratio you have is low enough not to worry about problems.
Here are the several key performance parts you will need:

Be sure to configure the ECU to work with these upgrades. Your new Evo collector will have to be adapted for the 4G64 engine, your stock internals can withstand about 300 HP at the crankshaft, and you need more? Then it’s a big risk.
Let’s consider the second way – a 4G64 with an Evo head. The result here will be much better! You will need a Mitsubishi Evolution head together with all its equipment.
The list of main OEM and aftermarket parts:

This way you can get 400 HP at the crankshaft and a faster spool than in an ordinary 4G63.
Somehow, I’m sure you want more than 400 HP. Well, let’s get to more aggressive mods.
Here are some changes and additions to the list above:

You will have to install oil jets in your 4G64 cylinder block and remove the balance shafts, so they do not interfere in building a powerful engine.
This is enough for your 4G64 turbo to yield 500 HP at the crankshaft.
The next step is head porting + 1 mm oversized valves + valve springs + bronze valve guides.

You have an excellent cylinder block and sufficient displacement, but the 4G64/4G63 hybrid doesn’t like high revs. It’s good for daily commuting, but your goal is very high power. It is for this purpose that destorkers are made when the displacement is sacrificed using long rods and a short-stroke crankshaft. It gives a high ratio rod/stroke ratio and the ability to reach really high revs.
We have all the same setup — a 4G64 block with a 4G63 head, but the displacement is only 2.1 liters. Such 2.1’s are built to get the highest revs and to achieve the max HP.
Here is the list of upgrades for building your own destroke kit:

Installing oil jets into the block is mandatory.
Sometimes, 162 mm rods + forged pistons with reduced compression height are used. This will increase the R/S from 1.77 to 1.84.
If you have decided to build such a bottom-end, you will need to upgrade your new Evo head.
You have to buy and to do the following:

This way is no different from what has been written above, but you will use a K1 94 mm crank. This will give you 2.2 liters of displacement (2.23 l) and still very high revs.

The last variant is increasing the displacement to 2.5 liters (2.42, to be exact). This requires a Brian Crower kit:

This is probably the highest displacement you can get with this engine. However, the real displacement will be only 2.52 liters.
You will need the following components:

If you bore out your block to 87.5 mm, the displacement will increase to 2.55 liters.